A town peppered with ditches and canals, where water is an essential element

Istán has always been an affluent town. In the sixteenth century, its rough fields in the sierras had abundant vineyards, whose raisins and wines were shipped to Flanders, Brittany and England from the port of Marbella. Its lavish vegetation comprises chestnut trees, nut trees and mulberry trees, dedicated to the silk industry.

After the Reconquista, the village was populated with old Christians coming from other parts of Spain, who had the property owned by the expelled Moors transferred to them. Some of them came from Huerta de Murcia and they spoke Panocho, a variety of the Murcian dialect. This influenced the way people spoke in Istán and even earned them a demonym.

The new settlers brought along new lifestyles and a new social system, too.

One of Istán’s greatest attractions is the numerous ditches and canals you come across in town, branching out to irrigate the gardens and orchards in the surroundings.

Invented by the Arabs, ditches are used to irrigate the fields and bring water to households. They are a fine example of the advanced knowledge of engineering the Arabs had when it came to the use of water. They knew how to take advantage of a rugged geography, developing plots where it seemed impossible to do so and using ingenious irrigation methods to feed them with water.

As a matter of fact, water is an essential element in the landscape and the spirit of Istán. Ditches and canals are still used for irrigation, giving rise to a network overlapping with the streets in some areas. The Acequia del Chorro, emerging from the source of the river Molinos, marks a stunning natural route. 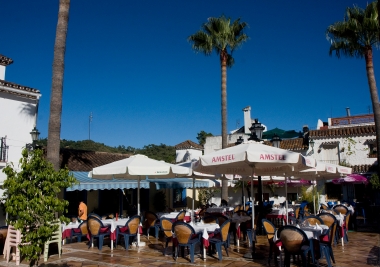